As you may have seen, the beta for Mailbox for Mac was released a couple of days ago. We thought we’d do a few quick tests to see how it’s rendering engine held up.

First we sent #emailweekly, which is a template we’ve built using fluid-responsive hybrid coding. It behaves in much the same way as most other email clients. 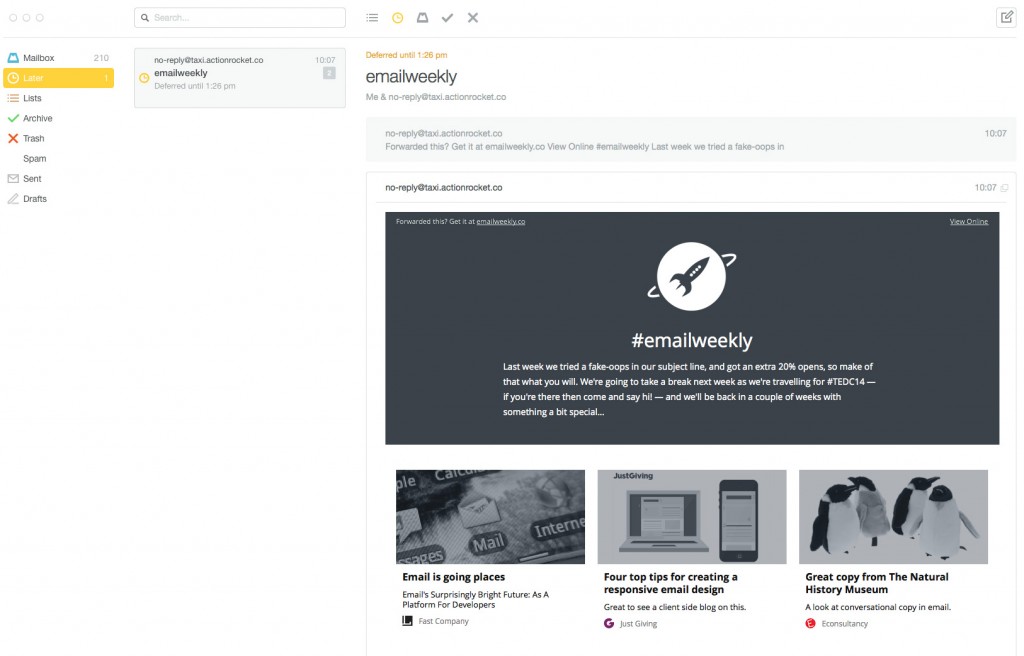 We did some tricks with opacity and :hover in this HTML. The opacity on it’s own seems to work (our preheader text has opacity of 0.8) but the hover state doesn’t seem to be supported.

Mailbox for iPhone doesn’t seem to support media queries either, which puts it in line with the Gmail app.

Animated gifs are supported, but when we tested using our moving studio email, the video tag wasn’t supported (so it went back to a fallback-gif).

As for the basics – images are turned on by default, though they seem to take a second or so to load.

We also tested some older HTML builds, both regular-responsive and non-responsive, and there didn’t seem to be much to worry about at first glance. There may well be the odd rendering challenge here and there, but it looks like code that works in the major email clients doesn’t have any problems here.

The overall interface is has lots of white space and is fairly unobtrusive, which makes the actual email the most prominent thing on the screen. Preheader text gets pulled into the inbox view in the same way as Gmail or iPhone.

There are some neat tricks that allow you to defer emails until a later date – so you can better organise your inbox. That’s one of the Mailbox USPs, but from an email rendering side of things nothing’s really affected there. It’ll be interesting to see how useful this functionality becomes though, and whether it gets incorporated into other email clients. It could be a bit of a game changer in terms of email user experience.

Of course, usage is still very low, and even usage of Mailbox for iPhone is only a small percentage of overall mobile device apps, but it looks promising nonetheless.

We have a small amount of betacoins — @actionrocket if you’d like one.

How we made the #emailweekly newsletter
iOS 8 Mail: The video tag is missing in action