Google have announced a new selection of features that allow email marketers to add interactivity to email campaigns via the Gmail interface. It means that we can mark up information such as event details or a travel itinerary in the HTML header of an email campaign, and which will then allow actions to be integrated into other Google services, such as the Google Now app.

It’s an interesting move as it could lead to a much more open standard for transferring actions from email campaigns into other places, like web and mobile apps. In the past we’ve had a few aborted attempts to add this kind of functionality to email clients – Hotmail smart mail was one – but they’ve all been siloed on one platform.

Using a schema.org style standard means that there’s potential for the same code to be used by other email apps. On the web, schema.org is used as a shared standard between Yahoo, Google and other search engines as a common standard to mark up content and add search functionality.

However it should be noted that these actions are for transactional, relevant emails – not bulk marketing messages. You’ll need to register your sending email address to use this, with one of the conditions being “Actions should be used for transactional mail where a high interaction rate is expected. They should not be used on promotional bulk mail.”

There are currently two types of actions, but there are more rumoured and in sandboxing: 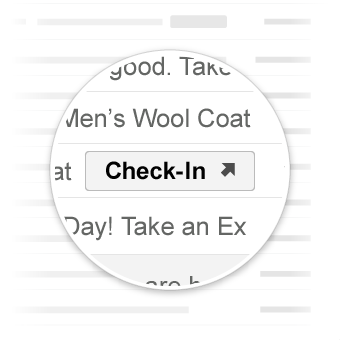 Examples of the code

Note that this code is still going through the process of standardisation, so isn’t live code, but it shows how this information will be marked up in an email campaign:

As this is added as a json script in the header section of the html, it will be ignored by other email clients with no detrimental effects. You can read more about schema code for email on the Google Developers site.