Kate Spade subject lines have been calling out to me for a while now, for 1 simple reason… 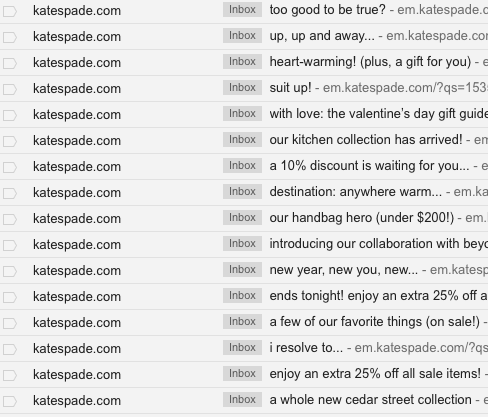 There are a couple of other companies that don’t use capital letters in their subject lines regularly, graze is another one. This trend could be an attempt to stand out in a cluttered inbox, people spot errors when something doesn’t look right so your eye is drawn to that specific email. It kind of looks like it could be personal and from someone you know (..it could also be the fact that both of their logo’s are all lower case and it’s just a branding thing, but that isn’t as fun). Whatever the reason it has my attention, however it’s one of those things, like emojis, as soon as everyone else starts doing it, the whole idea is then, well, pretty useless.

One day, admittedly on pay day, I opened one of the emails. Interestingly, all of the copy is capitalised and they often include a sweet & simple animation. Here are a couple of my favourites GIF’s from the last few months:

I’m sure these aren’t the first companies to do the no-caps thing, i’ll be keeping an eye out for others and similar.